Y’all know the head statesman of Taylor Gang was arrested on Monday for felony drug possession. He was released early this morning on $300,000 bond. Wiz says he burns through like 10k worth of green a week so I guess this was bound to happen.

No not together, although it would be great if they did a collabo,  just some youtube clips.  Kenzie May at band rehearsal (sounds like she is great live but we knew that) and a cool Wiz Khalifa video to his new song “Know Your Name” (not sure if its official but its dope).

What up it’s your boy TheRealness.  Check out the cyphers from the 2010 BET Hip Hop Awards.  Who y’all think had the best verse? If you ask me, Common came with the most fire.   What do y’all think? 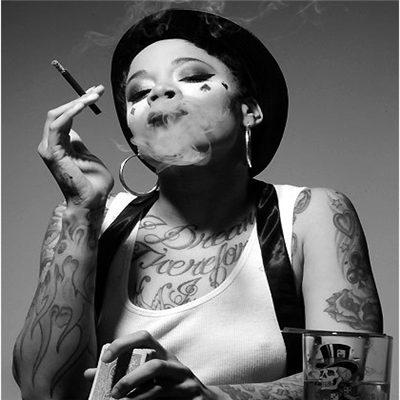 I’m obsessed with tattoos.  I admire other people’s tattoos.  I Google pictures of cool ones in my spare time. I’ve been to the tattoo parlor to watch other people get theirs.  Oh, but I don’t have any.  And not because I don’t like pain or whatever dumb excuse people who don’t have tattoos make up, but there has been no event, person, place, or thing that makes me want to get one.

People can get tattoos of anything and it’s a genuine art form.  There are some talented tattoo artists out here, too.  They’re work is brilliant, and probably deserves to be hanging on someone’s wall.

Some people think it’s stupid to get a person’s name or initials on them, not me.  I think that it signifies at that moment in time you felt so strongly about that person that you wanted to make it last forever.  I can’t knock that. Pharrell recently went through the painful laser removal of tattoos across his entire upper body, so I’m guessing  he got some tats he regrets.

One thing I don’t buy into is the myth that getting a tattoo makes you different or original.  Really, we all want to be super original, but the truth is none of us really are.  That’s why groups of people have the same tastes in music, clothes, and entertainment.

“You are unique! Just like everyone else.” – Dee Dee’s Mom

I was on Twitter today and MarsMcFly pointed out that he mixes up Wiz Khalifa and Tyga… I realized I did too!  Not their songs or lyrics of course, but them.  They look alike because the way they express their originality, with full body tattoos, is the same.  It’s seriously hard to tell them apart.

So a question to the public, why did you get tatted up?  What makes your tatt’s truly one of a kind?  Do you have any you regret?  Who you do let your kids get a tattoo?  If so, how young is too young?