Lady Gaga or Gaga as she likes to be called (as told to Oprah) is known for her out of the box costumes and videos. In an industry full of replicas Gaga is the breath of fresh air that we all need. She brings originality to the table and does things that make you scratch your head and wonder “Is she out of her mind?” There is a method to her madness and we just can’t comprehend it, we barely appreciate it. A recent interview she did with Oprah shed some light on her costume choices. 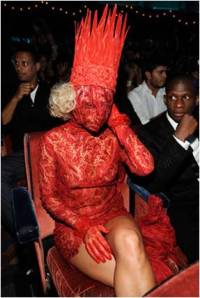 She had this to say about the red outfit she wore to the VMA’s: “That’s Alexander McQueen, and I added the hat to it. It’s the oldest archive in the McQueen Collection. It was meant to be a continuation of the VMA performance. So after … the princess had been murdered by the paparazzi, the red lace was meant to symbolize sort of my eternal martyrdom.

Like Gaga I don’t like to wear fur. She chooses to express herself by wearing a Kermit the Frog outfit. She said that fur look like a bunch of dead Muppets. While I won’t go that far I do agree.When meeting the queen most people would go with a conservative traditional skirt or dress. Well, Gaga isn’t most people. She decided to pay homage to Queen Elizabeth II by wearing a dress inspired by Queen Elizabeth I and the Elizabethean era.

I’ve noticed a strong comparasion between Alexander McQueens style and Gaga’s. In October 2009 McQueen Paris Fashion week Spring/Summer 2010 finale song was non other then Gaga’s Bad Romance. Later when Gaga went to film the actual video she chose to use some of McQueens Spring/Summer 2010 items. The armadillo heels, the beaded turtle neck and the dragon heels are among some of the outfits she choose. To be honest if she didn’t use them we wouldn’t seen them anywehere else but the runway. I love Gaga. Her music and style are so different. I look forward to everything she has in store for us fashion and music wise.

3 thoughts on “Gaga Over Gaga”