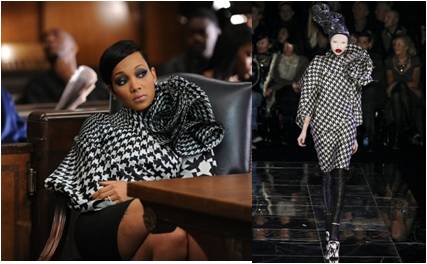 Monica’s newest video “Everything to Me” has clothes that look like they came straight off the runway…in fact they did. In the video Monica is wearing a houndstooth shirt from the late Alexander McQueen’s RTW fall 2009 line. In that line the shirt Monica is wearing was actually a dress, tailored into a shirt and the chicness is still the same. The shoulder flower may seem like a bit much, but with her slick hair and minimal accessories the flower becomes the accessory. The different size pattern also makes a difference. The pattern is widest around her arms and smaller around her face. That helps the print to not seem overwhelming. 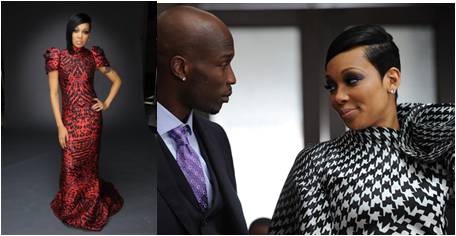 The red dress is also by McQueen. The dress is pretty basic, but the shoulder detail and back bustle steps it up. In this video Monica went for classy and sophistication and I think she achieved it. *RIP Alexander McQueen* 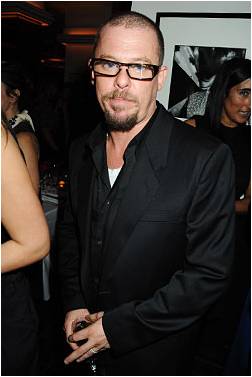 Alexander Lee McQueen (1969-2010) is one of the most brilliantly misunderstood fashion minds of our time. Celebrities the like of Rihanna,  Lady Gaga, Bjork and Sarah Jessica Parker (SJP) are among the few that “get him”.

Early on McQueen new he had a talent and passion for fashion. He left school to become an apprentice on Savile Row in London. Savile Row is known for their men’s bespoke tailoring. His clients where among the elite like a certain Prince Of Wales (Prince Charles).  At age 20 McQueen began working for Japanese designer Koji Tatsuno. Upon returning to London McQueen enrolled in a prestigious fashion school where he received his Masters in fashion design.One of McQueen’s greatest accomplishments in my eyes would be when he was given the position of head designer of Givenchy in 1996.  In 2009 McQueen inked a deal with Target; his line at Target was called McQ.

It may look like he had it all but just because you’re famous doesn’t mean you’re happy. Three years ago McQueen dealt with the death of a close friend, Isabella Blow, who is also credited with discovering him. Earlier in the month he lost his dear mother.

Alexander Lee McQueen will greatly be missed, but he left us with inventive fashion and originality. 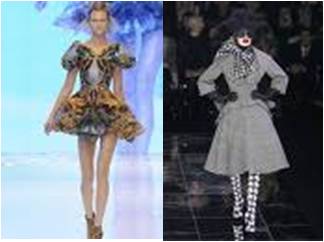 This look on the left is from his RTW (Ready to Wear) 2010 line. This looks very punk Alice in wonderland. The picture on the right is the line that got me hooked on McQueen his RTW 2009. This line was basically all houndstooth. I love love love houndstooth.